Former Cincinnati Bengals defensive defender Adam “Pacman” Jones joined with former NBA players Matt Barnes and Stephen Jackson remotely at Showtime Basketball’s All the smoke and talked about everything from an anti-bullying comic titled ActionPAC that he created with his family for his adopted hometown of Cincinnati and his time with the Bengals, as well as his use of marijuana throughout his NFL career. 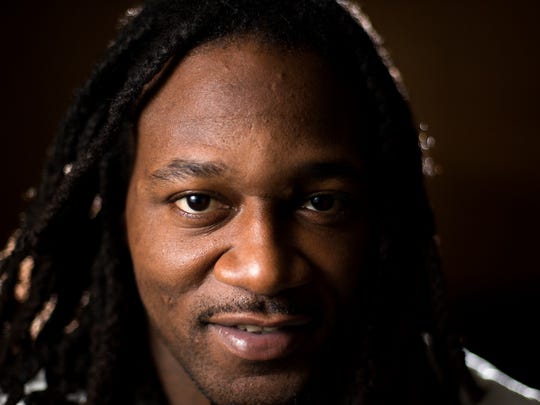 Adam “Pacman” Jones poses for a 2015 portrait during his time at Cincinnati Bengals. (Photo: The Enquirer / Sam Greene)

(Attention: The podcast includes the NSFW language and participants appear to be smoking marijuana.)

“I had some loyal fans (in Cincinnati) who stayed with me when I (the expletive) was hitting the fan and everyone was saying it was going to happen, it was going to happen,” said Jones. “You know, I personally thank Mr. (Mike) Brown. We didn’t end up the way we wanted to, but he was very loyal to me, man, and he stayed with me for 150 percent and that a lot to do with Coach Marvin (Lewis too. Home is Cincinnati to me. I know I’m from Atlanta. I love Atlanta. I go to Atlanta often. I still have a home in Atlanta. But Cincinnati is my home. I love the community. I love what I’m building here. “I’m working on different adventures in the city. I have a restaurant. I’m working on some properties, doing this and doing that. A lot of guys around me are helping me – trying to build what I’m trying to do. You don’t understand that in certain cities.” As I know Atlanta – I love Atlanta – but I can’t go and build relationships that I’ve built here in the last 10 years … And it gets to the point where these kids are who you’re living for … That’s what I’m excited about now. “

Jones also called the former Cincinnati Reds player and Pro Football Hall of Fame Deion Sanders a “father figure” and talked about how it was Sanders who called Bengals defensive coordinator Mike Zimmer and organized a training session with Cincinnati when Jones was out of football for a year.

“I’m bipolar, but I never told anyone about my bipolar, because I didn’t want it to interfere with anything else,” Jones continued. “Different things that I dealt with quickly, but only between me, my family, my wife and my doctors … that people don’t understand. And when I was playing football, I didn’t want to not take medicine because I didn’t want that to keep it away my passion for what I was doing … when I’m playing at the highest level I’ve ever played … I had to figure out how I’m going to make this work. So I think now it’s time to move on and put my life together for me, my children and my family. So it takes time and everyone is yours. I’m not here to judge anyone. As long as you find out… I’m happy. I’m happy. My children are good. I have everything I want pretty much. great relationship. with my family. I have no problems. Life is good here, man. “

Jones discussed his use of marijuana: “I never stopped smoking in any of my careers – not once. I smoked before every game. … If we play at 1:00, I hit one at 8:30, I’m ready to go … Here in Ohio, we have medical marijuana … … I’d rather smoke marijuana than take 200 Percocet, you know what I mean.

Barnes compared Jones to him and Jackson, suggesting that people misinterpreted them based on negative headlines, but did not allow “a chance to meet the real person”.

Cincinnati Bengals coach Zac Taylor was in a chat with Zoom on Wednesday, ahead of the 2020 NFL Draft.