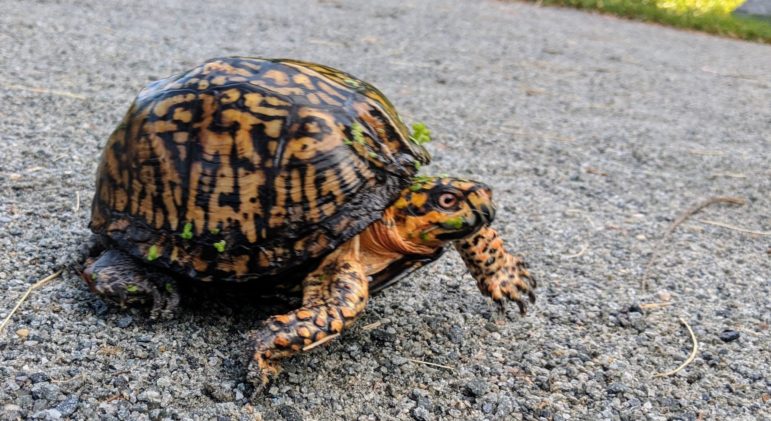 Among the flora and fauna of the Last Green Valley, the eastern box turtle

The Connecticut Department of Energy and Environmental Protection granted provisional approval of the 401 water quality certification for the Pomfret to Killingly pipeline. I urge DEEP to deny 401 certification, as the proposed pipeline would violate Connecticut’s water quality standards and conditions in the certification project fail to protect our streams, swamps and wildlife.

DEEP’s mission is to protect Connecticut’s environment. We in the Northeast “Quiet Corner” value our rivers, streams and wetlands. That’s why we chose to live here. The lands to be impacted by this pipeline are special to us, especially Connecticut Audubon Pomfret and Wyndham Land Trust areas. These lands are fragile and, in fact, DEEP has been working to restore the Wyndham Marsh, work that is likely to be undone forever if this proposal is approved. This project would destroy the habitat of several endangered and special interest species listed by the state, including the American bittern, the northern owl, the northern eared bat, the eastern box turtle and the sea turtle. -wood.

This is one of the most important areas of untouched land left on the east coast, known as “The Last Green Valley ” and part of the Quinebaug-Shetucket National Heritage Corridor. The water here supplies much of eastern Connecticut, all the way to Long Island Sound. Potential leaks from the pipeline and damage to construction threaten the waters of the Quinebaug River and several streams and swamps that the pipeline will cross.

In the bigger picture is the objective of this gas pipeline, which is to feed a new source of pollution for our air and water, the proposed Killingly Energy Center. This pipeline would destroy swamps and endangered species to build an unnecessary and unwanted gas plant that goes against Connecticut’s mandatory climate goals. Emissions from a second gas plant in Killingly would jeopardize children’s health at several schools located near the site and increase asthma rates in County Windham.

DEEP must deny 401 certification for this pipeline because it will endanger our wildlife, watercourses and wetlands in danger – as well as our communities and our health!

Susan Eastwood of Ashford is president of the chapter Sierra Club Connecticut.

CTViewpoints accepts refutation or opposing views of this and all of its comments. Read our guidelines and send your comment here.