Gareth Southgate, Harry Kane and Marcus Rashford get the Spitting Image treatment as they are immortalised in rubber for Britbox comedy’s new series

By Laura Harding and Lauren Lewis For Mailonline

Gareth Southgate, Harry Kane and Marcus Rashford are the latest stars to get the Spitting Image treatment after their heartbreak in the Euro 2020 final.

The satirical comedy will be back on BritBox for a second series on September 11 after it returned to screens in 2020 for the first time in 24 years.

England captain Kane points at the Three Lions on his chest under a blue training jacket, while Rashford looks earnestly into the camera with his hands clasped. 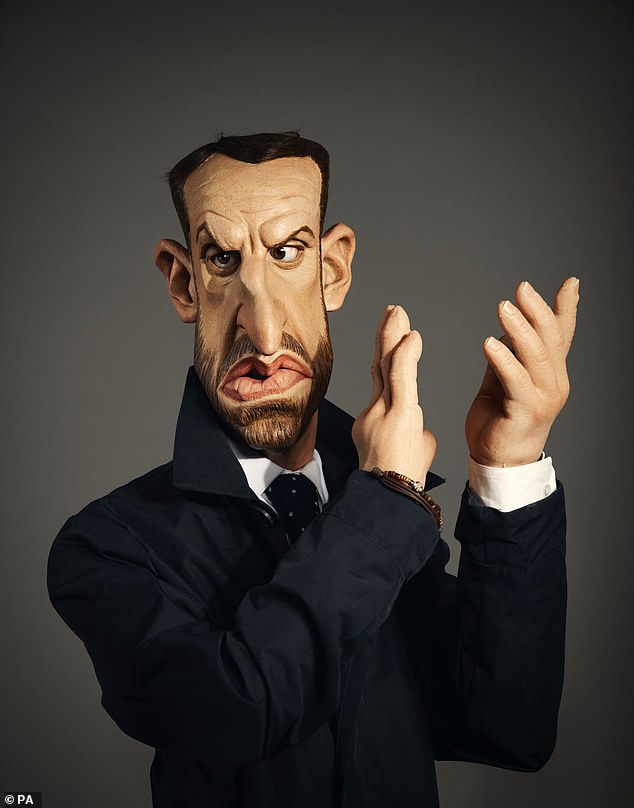 Gareth Southgate, Harry Kane and Marcus Rashford are the latest stars to get the Spitting Image treatment after their heartbreak in the Euro 2020 final 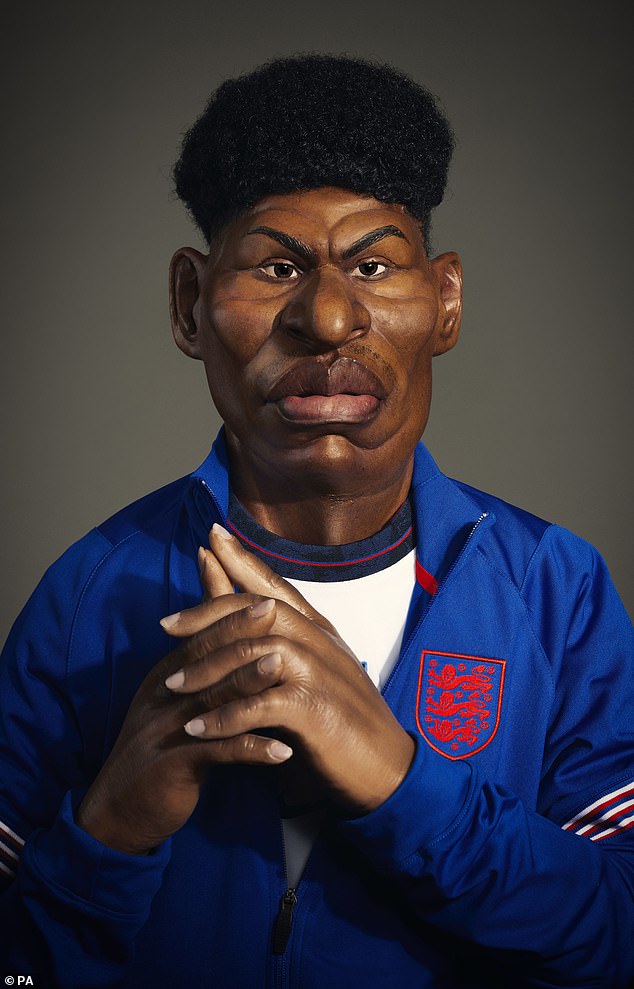 In pictures revealed by series co-creator Roger Law in a Royal Television Society panel session, Marcus Rashford looks earnestly into the camera with his hands clasped 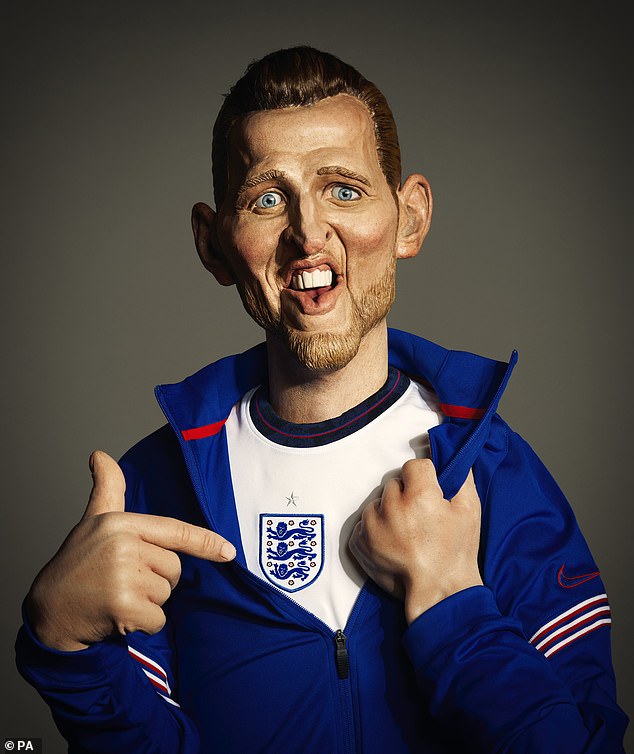 The first series of the show featured public figures including Boris Johnson, Dominic Cummings, Greta Thunberg, Donald Trump and the Duke and Duchess of Sussex.

Law, who returned to head up the rebooted show’s creative team, said: ‘In this next Spitting Image series we will be in line with Boris’s “Levelling-up Policy”.

‘The puppets are moving to Hartlepool. We were going last week but we all got pinged on our apps so Dominic Cummings will be driving us back and forth until the HS2 is operating.

Law added: ‘Also in line with Boris, this series will go massively over budget with the full support of BritBox.

‘We will also be levelling off the number of our political puppets by introducing puppet characters that have a grasp of what they do for a living – the English football team along with Gareth Southgate for starters.

‘With lunacy rife, it is a tough time for satire but someone has to do it.’

Nana Hughes, ITV head of comedy and BritBox commissioning executive, added: ‘We welcome the return of Spitting Image to BritBox this autumn.

‘With the twists and turns of the current political climate I have no doubt that Roger’s puppets and Jeff’s writing team will produce sketches that will make us laugh a lot and squirm as much as watching Matt Hancock’s secret snog!’

A scene from last year’s series showed Boris Johnson and Donald Trump eating fried chicken in the hot room together before the Russian premier enters accompanied by two blondes and attacks.

Their towels drop during the fight to reveal their full puppet anatomies at the end of the jawdropping trailer.

Spitting Image originally ran for 18 series between 1984 and 1996 and was watched by 15 million viewers in its heyday. 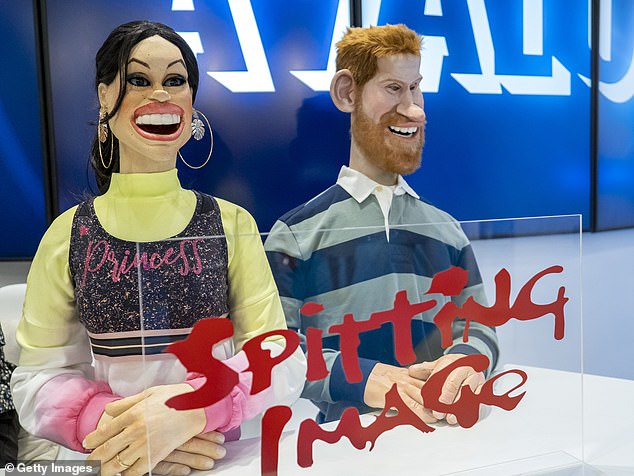 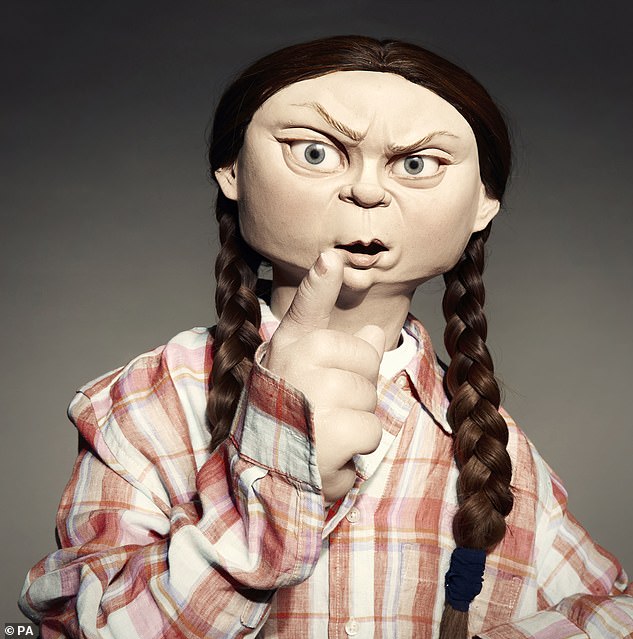 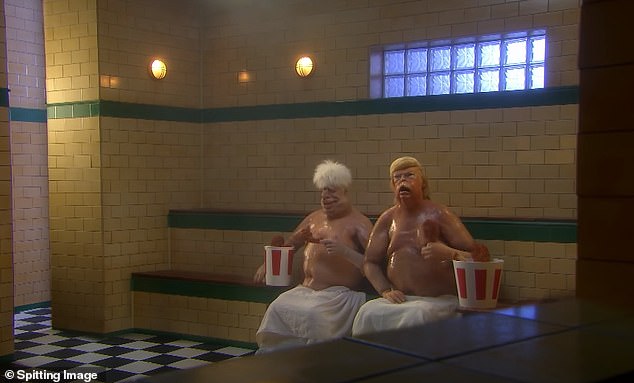 A naked sauna room Kung-fu fight between Boris Johnson, Donald Trump and Vladimir Putin provides the shocking centrepiece of a trailer for the first series of puppet satire Spitting Image after 24 years 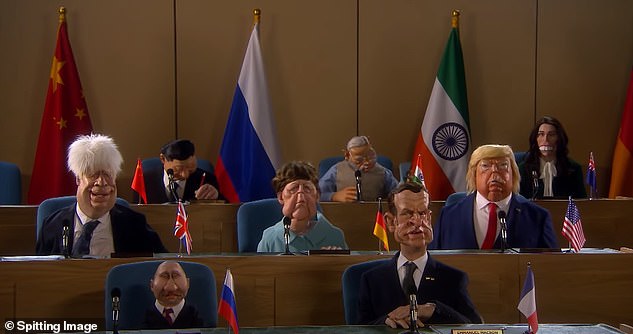 The show took aim at a host of world leaders including Boris Johnson, Donald Trump, Emmanuel Macron and Angela Merkel 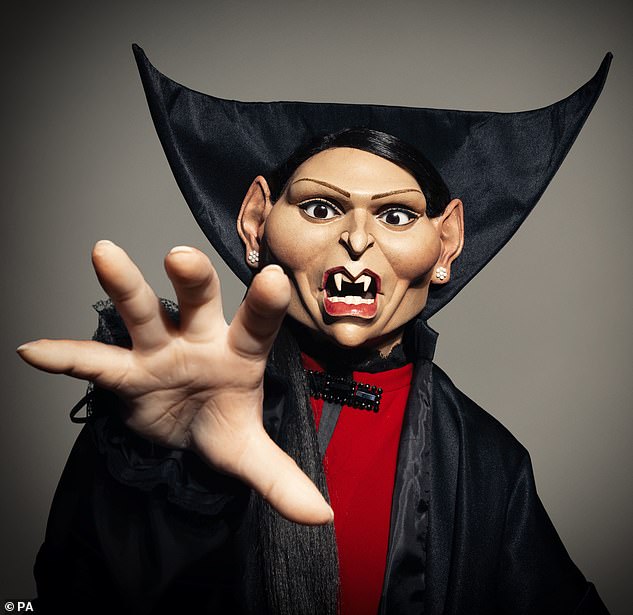